Don’t Gamble With What You Cannot Afford To Loose

Descending down the stairs, the party came upon a small stone doorway which entered a 30X30 ft room. On the other side of the room was another stone doorway and around the walls were eight fine silk curtains, one of which was torn. The roof of the room depicted a great battle between goblins and dwarves in a relief carving. Helrick scoured the floor and found goblin footprints leading from behind one of the curtains. Peering behind the curtain the party found a jagged and rough hewn cavern leading them along the path to a small room. The ranger, cleric, paladin, and the wizard travelled down the path as stealthily as possible to see what lay beyond.

Seeing a human ordering around a number of goblins, the party decided to quietly retreat without raising an alarm. Upon their return they apprised the others of the situation before them, of the human working along side a goblin contingent. The menagerie decided to quietly formulate some form of plot to deal with the group not so far away.  They quickly decided to hide long the wall as to be unseen by the goblins, placing only a few members in the open to draw out the goblin force and trap them. 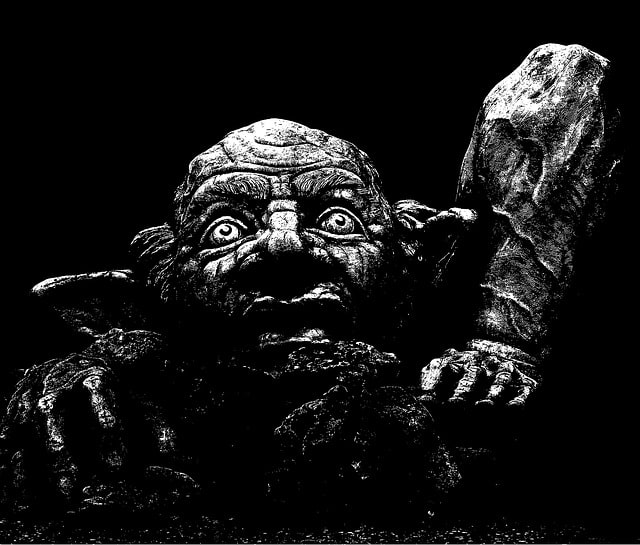 The placement of only a few individuals in sight did surely draw out the goblin raiders, but as a trap is laid bare the bait is often taken.  The first three rushed in within seconds and as such they swarmed as flies often do, then more and more overwhelming the first unlucky victim en masse with little room to breathe. The party struck at them wildly, hewing bodies in all directions with as much speed as they could. When the waves stopped crashing against them, one member lay drowned by the deluge of the goblins, Helrick the ranger his arrows sticking out of over half a dozen of their kind laid victim.
The goblins seeing this as the main target of the attack sieged the bastion of the ranger, and after overwhelming him they dove their short swords into him to ensure that he would slaughter no more.

Kneezmat, Kelarick, Jessamine and the mystery cleric quickly declared a vow of vengeance and pushed their way down the small and sharp passageway to confront the human turncoat at the end of their path. The tunnel was where they would confront him, in his pride he could not see one such as himself taken down by such a pathetic force. He did not know that the gnome was one who relished combat in such closed quarters, for to him there was more than enough room. More than enough to use his training that was taught to him over many years, training on how to make the tall-folk stumble or smash their weapons against a wall. How to duck under strikes, how to parry strikes, how to force others to miss. While he did his work the ranger had little chance to land any blows. Though land one or two he did, nearly felling the gnome with one thrust of his blade. Were it not for the healing of the paladin Kneezmat almost met his time, but that time was not quite to be yet. Finally the ranger fell and the group made sure to finish the job, no less than six to eight fatal blows landed after the killing blow itself did it’s work. This was not just ensuring his death, this was a message.

“Fell one of us, and you too shall fall.”